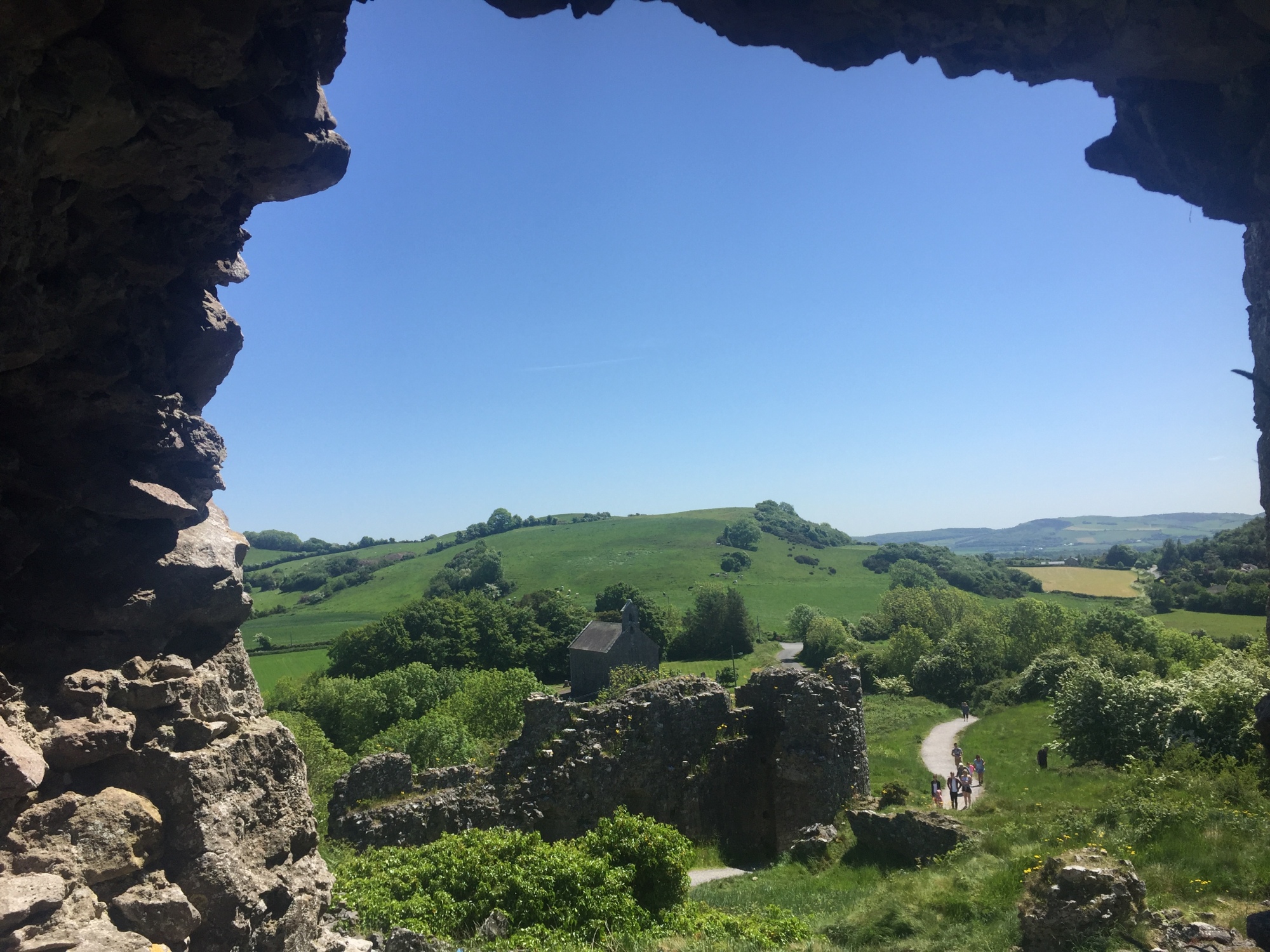 This last week my grandmother came to visit me on the Emerald Isle. We had been planning this trip for weeks and I was so excited that it had finally come. Little did I know she brought along a little surprise. I’d like you to take a minute and picture that scene from Love, Actually. You know the one in the airport where everyone is reuniting with their loved ones… When I finally saw my grandmother walk  through the doors of the airport i was so incredibly excited, however, she was acting a little weird. I put the blame on jetlag. She said she wanted to film me for my family which was incredibly odd due to the fact that I Facetime them almost everyday. After obliging for a little bit I was ready to leave the airport. Then, from the corner of my eye I saw my older sister walk out from the gates! I was so incredibly shocked! Apparently they had this planned for a long time. So not only did I get to spend a fantastic week with my grandmother but also my older sister. I was so ready to take on Ireland with some of my favorite people.

Their first day in the country we hung around Dublin in order to let the ladies rest up and prep for a week of adventure. Though we did some activities that I had already done (the Dublinia and Christ Church) we still had a blast. I am pretty sure the highlight was our dinner at the Brazen Head which claims to be Ireland’s oldest pub. We were treated to a night of traditional Irish food and folklore. Though it was incredibly touristy we had a blast. After each course a man told us all about the history of Irish food, the myths and legends of faeries, and the art of storytelling in Ireland. You never really think too much into the food of a country and how it pertains to the culture, but this dinner really brought to light the struggles the Irish had with simple things like food. In all honesty it was the best introduction to a fantastic week of touristing around the country.

For the course of the week my grandma hired a personal tour guide/ driver to take us around to see the sights. I am pretty sure this was the BEST way to see the entire country. Every morning at 9AM Brian would come to the hotel and we would loosely plan what we would want to do/ see that day. PS: shout out to him for dealing with our whackadoo planning and scattered ideas. By deciding to travel and see the country this way we didn’t really miss anything. We opted to do one major “tourist” thing a day and the rest was easy peasy. We didn’t have to jam pack the day with famous sites in order to to ensure we saw everything. Instead we took the back roads, avoided any motorway, stopped at our leisure, and excitedly stopped to look at as many sheeps as our hearts desired. Throwing in fun facts every few minutes and quizzing us on our knowledge Brian kept us on our toes for the entire week.

On our first day of driving we had the intentions of heading down to Waterford via Glendalough. We had planned to take the scenic route stopping at a few destinations before making it to Waterford. Instead we got a bit distracted. Driving through the Wicklow Mountains our eyes were invaded by some unbelievable sites. From adorable little lambs to gorgeous landscapes my eyes didn’t know where to look. My heart was so full to be sharing these moments with my sister and grandmother that I didn’t mind that we had to forego our plans for Waterford. The mountains constantly blew my mind and seemed to call my name. On our way through the Wicklow Mountains we made it to Glendalough an ancient monk village full of history. As soon as you walked the the large stone arch you were immediately realize you are in a place that has seen some things. The buildings which have miraculously stayed standing after centuries exude history. Each gravestone in the cemetery seemed to tell its own story. Some dating back to the 1600s talking of men who helped the children and the widows. Whilst my grandma sat and rested Keokee and I opted to do a little more exploring. We ventured along a boardwalk that lead to one of the major lakes taking in as much of the gorgeous scenery as we could. The amount of little lambs that were in our view made my heart so incredibly happy. I adored every minute of it. After exploring Glendalough to our hearts desires we headed to Avoca to see the some gorgeous weavings. As it turns out, the place we headed for lunch happens to be the one pub outside of Dublin my grandmother had been to on her previous trip! It was  such a small world considering it was a pub that was in a tiny tiny town!

Day two was full of neolithic glory. After years of studying up on the subject I finally was able to experience Newgrange. This is an incredibly sacred site that was used as a tomb in prehistoric times. It dates back before The Pyramids and Stonehenge and holds a certain mystery when considering how it was built. As we arrived to the site I was overwhelmed by what was before me. To those who don’t really know what Newgrange it, it looks like just a huge mound on the top of the hill. However this unbelievable site holds thousands of years of history within its walls. For those who don’t know, Newgrange is a site that holds so much mystery. It was and remains to be an incredibly sacred site. A place that served as a tomb and a place of worship. It blows my mind to think back to the people who lived around this area and decided to build such a grand place. Being able to walk through the tiny chamber that was so meticulously built that the sunrise of every winter solstice the sun would provide a tiny beam of light reaching to the back room of the chamber. It has an incredible vibe about it and I was so stoked that I was finally able to experience this bit of magical Ireland. That same day we headed up to a quaint seaside town called Carlingford in the north. We were able to enjoy an AMAZING lunch at a local cafe called Wildwood while looking across the bay to Northern Ireland. Seriously, if you ever find yourself up that far north be sure to check out this little cafe. The husband/wife duo truly made some unreal organic dishes! Post lunch we decided since we were so far north we might as well hop over the border just to say we had been in Northern Ireland. Like all of the driving we had done that week we drove through the mountains and the back roads. One thing that I noticed while driving through the rural bits of Ireland is that the type of landscape changes in an instant. It goes from gorgeous hills and mountains to flowers and coastal all within a few moments. It is breathtaking. We finally stuck our toes over the border in order to cross it off our bucket list and headed home after a long and wonderful day of touristing.

Our last day with our flawless tour guide took us south to Kilkenny. The route there brought us through some adorable little towns and we once again saw our fair share of sheep. My favorite town included some genius engineering and featured a canal built over the river in order to not have to divert the path. It was absolutely hysterical. We then arrived at Emo Estate. From the gardens to the grand entrance of the house every inch had that Downton Abbey feel around every corner.To think that people lived in such opulance truly blows my mind.  I think my absolute favorite memory of this entire day is when we discovered an old destroyed castle on top of a limestone hill. Keokee and I hiked up to see the unbelievable views from above. As we looked down to the carpark, I saw my grandmother start the trek up the hill! She opted to ignore her aches in pains in order to see something unreal. though she took it slow she made it to the top. The memory did not disappoint. I will forever remember how fantastic it was to see her up there with us taking in everything. Each destroyed wall seemed to frame the scenery in such a perfect way it looked like a photograph. Much like most of the gorgeous landscapes you find in Ireland, this one didn’t seem real. The colors, the mountains, the sheep…. Everything seemed to be out of a painting and I am forever grateful that I get to live in a place such as this.

The five short days I got to spend with my family were some of my favorite days in Ireland thus far. It was wonderful to have bit familiar faces with me and nonstop days of exploration. Though I will definitely go back to some places I saw and do some great hiking I don’t think anything top the days spent with my grandma and sister. We were able to see parts of Ireland that otherwise would have remained a mystery. As much as I love traveling on my own it was nice to have some company for a while.

This site uses Akismet to reduce spam. Learn how your comment data is processed.